Catherine ‘Cath’ Goymer (1940 – 2019) was born in Willesden to Joe and Rowley Beach. She had an elder brother, Joe, and two younger sisters, Irene and Gwen. Cath won a scholarship to the Henrietta Barnet School in Hampstead Garden Suburb. After school, she worked as a secretary. She married Tony Goymer in Willesden Parish Church in 1961. They were married for 58 years. They moved to Kenton where they lived for 10 years. Here Cath became chair and secretary of the local Young Mothers’ Club. They then lived in Hatch End for 20 years, before moving to Mortehoe in Devon in 2002. Cath had two sons, Colin and Jonathan and five grandchildren, Rosie, Benjamin, Sam, Amy and Abbie. Cath and Tony were accomplished ballroom dancers, even dancing at the Royal Albert Hall. Cath died on 29 July 2019. 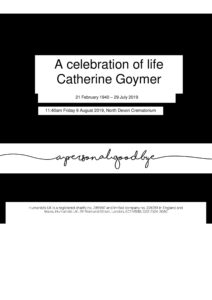 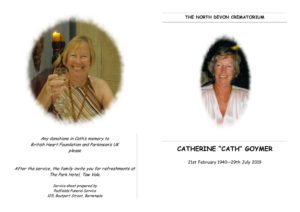