Michael Tudor (1965 – 2019) was born in Liverpool to Cathy. He had two sisters, Tina and Alison. He passed his 11+ and went to Campion grammar school but left without any qualifications. He left home at 16 and did various jobs in Liverpool. He met his life partner, Diane, in 1987. Michael did an Art and Design BTEC course. He and Diane then moved to London, where he went to Thames Polytechnic, to study Humanities. Michael’s teaching career included Community Music teacher at the Rathbone Arts centre, course leader for digital arts at the John Evelyn Centre and teaching graphics at Sacred Heart. Music was an essential part of Michael’s life, both as a musician and as a fan. Michael married Diane on Valentine’s Day, 2017. He had been diagnosed in August 2016 with stage 4 lung cancer. However, in February 2019 he developed serious complications and his condition began to deteriorate. He died on 20th May 2019. 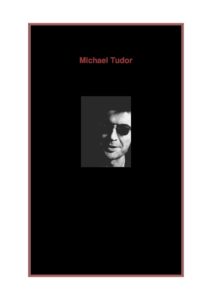