Jenny Baker (1945 – 2019) was born in Liverpool to Jean and Harold and had a sister, Val. She passed her eleven plus exam and went to grammar school. Her first job was in insurance, followed by a year in France as an au pair. After returning to the UK, Jenny met and married Greg, with whom she had three children, Samantha, Lucie and Adam. After a move from Hampshire to Cheshire, she and Greg split up. Jenny and the children moved to Waverton, where she met Frank and his young daughter Jo, she and Frank married, providing happiness and stability for all their children. Jenny had a full career, including various volunteer and caring roles. She and Frank set up a laundry service. Jenny was a magistrate for 25 years, a labour councillor and a humanist funeral celebrant. Jenny died on 26th May 2019. 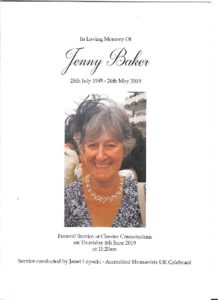 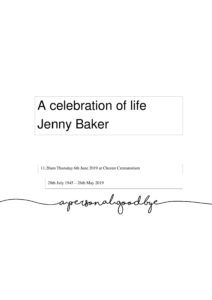