David Lawrence Knight (1955 – 2019) was born on 12 July 1955 in Leyton, East London, to Dora and Dave. He had one brother, John. David married Anne when they were 20 and 17 respectively. They had two children together, Joe and Ellie. David trained as a social worker, specialising in working with children and families including time at Snakes Lane children’s home. He took an active role in his trade union, becoming a NALGO shop steward and the branch secretary of Unison in Waltham Forest. He helped to set up the Waltham Forest ‘Stand Up for Your Rights’ organisation. David was a lifelong supporter of Leyton Orient FC. He set up their fanzine, the ‘Orientear’ in 1986 and was involved with Leyton Orient Fans’ Trust. David was a member and organiser of East London Runners club and completed 15 marathons for charity. He was honoured as a Life Member of the club. David died on 24th August 2019. 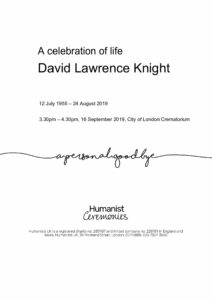 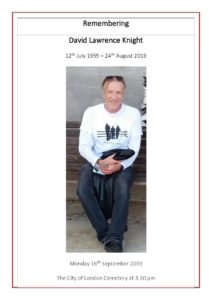 HFTA 220 David Knight Order of Service (pdf)
Celebrant: Kate Hobson
Tribute to David Knight delivered at a Humanist funeral arranged by their family. Includes a digital copy of the funeral's order of service (2019)