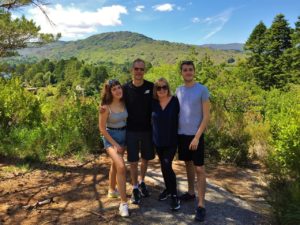 Anthony (Tony) Keen (1957 – 2019) was born on 30th July 1957 at home in Hillingdon, to Peter and Muriel. He had two sisters, Susan and Jenny. The family moved to Ickenham in 1968. After leaving grammar school, Tony had various jobs until settling into the role of international sales representative for a number of apparel companies. He rose to be Vice President of Global Distributors at Timberland. Tony married Margaret O’Sullivan in 1991. They moved to Iver, Buckinghamshire in 1992 and had two children, Daniel & Laura. After taking early retirement from Timberland in 2011, Tony set up his own business AMK Business Solutions. He retired from this in 2015, then worked with Margaret in property management. Tony played squash, basketball, and handball, for which he was an International Judge. He cycled with the Hillingdon Cycling Club and was a runner. Tony was diagnosed with oesophageal cancer in September 2018. He died on the 25th August, surrounded by his family. 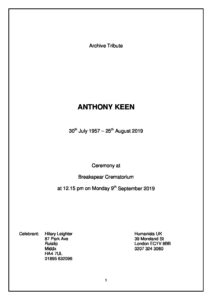 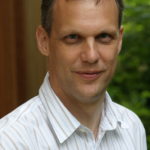 Celebrant: Hilary Leighton
Tribute to Anthony (Tony) Keen delivered at a Humanist funeral arranged by their family. Includes two digital photographs of Anthony (used in the funeral's order of service) (2019)