Christine Patricia Vincent (1957 – 2019) was born on the 15th February 1957 in Calcutta, to Pat and Archibald. The family returned to the UK, when Christine was two, and settled in Kent. She had two sisters, Susan and Rhiannon. In 1963 Christine’s mother married Leslie Dyte, with whom she had two boys, Martin and Anthony. When the marriage ended in 1970, Pat and the girls moved to Bristol, where Christine attended St Bede’s Catholic College. In 1984 she married Paul and the couple moved to Wells. They had two sons, Sam and George. She gave up work to raise the boys but returned to work when Paul took over the childcare. Christine recovered from breast cancer in 2000 and, against the odds, survived oesophageal cancer in 2007. In 2010 she trained as a beauty and complementary therapist at Bridgwater College and in 2012 set up her own business, Given Holistic Beauty. Christine died on 28th April 2019 at St Margaret’s Hospice in Bishop’s Hull. 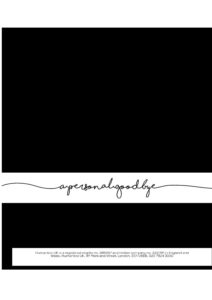 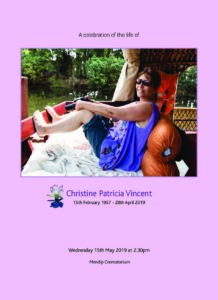 HFTA 224 Christine Vincent Order of Service (pdf)
Celebrant: Julie Wright
Tribute to Christine Vincent delivered at a Humanist funeral arranged by their family. Includes a digital copy of the funeral's order of service (2019)