Hanna Henry (1919 – 2019) was born in Athens in 1941, ten years after her two brothers, Peretz and Eliyahou. The family had to take fake identities and move to a remote village during the war, but returned to Athens in 1945. Hanna and her parents moved to Israel in 1950. She went to school in Tel Aviv. When her father died, Hanna and her mother moved to London where Hanna took her A levels and then began to study Law. They moved to Cambride in the early 1960s, where Hanna took a secretarial job at a bank. She married William in 1968. After a brief time living in Edinburgh, the couple returned to Cambridge, where Adam was born. They then moved to Stevenage, where Reuben was born. When William joined the RAF, they moved to Lincolnshire and then Pembrokeshire, where Benjamin was born. After another move to Norfolk, they finally settled back in Cambridge, where Hanna again worked as a secretary. After recovering from cancer, Hannah was diagnosed with primary progressive multiple sclerosis. For the last ten years of her life Hanna needed to use a wheelchair but she continued to maintain an active life. In their retirement Hanna and William had joined the Cambridge Jewish Residents’ Association and the University of the Third Age. Hannah died on 7th October 2019. 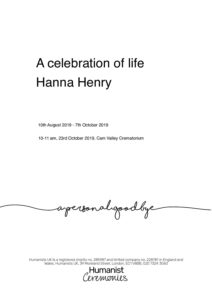 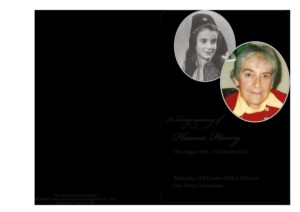 HFTA 228 Hanna Henry Order of Service (pdf)
Celebrant: Lynne Harrison
Tribute to Hanna Henry delivered at a Humanist funeral arranged by their family. Includes a digital copy of the funeral's order of service (2019)