Lilian Riley (1929 – 2019) Lillian was born in Liverpool on the 24th January 1929, the daughter of a shipyard worker, and the eldest of four children. She and her sisters were evacuated to the Welsh Borders during the War. Later, she met John Robinson, by whom she had a son, Clive in 1956. She married John in 1960, and they divorced in 1964. In the meantime she had adopted Ade, originally from Nigeria, and for some years she was a single mother in the Wirral, supporting her two sons, before financial and social pressure led her to send Ade back to Nigeria. They did not meet again for 36 years, but then Clive tracked him down and they became close again. She often visited him and his family in LA. She was also close to John’s daughter Pat, and cared for her children. She worked in children’s homes until her early retirement. After Clive left home, she married Frank Riley, and they lived happily together till his death in 2003. She then moved to Hastings, to be near her stepdaughter and son. She died on October 4th in hospital in Hastings after a short final illness. 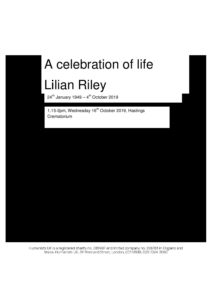