Michael (Mike) John Lewis (1950 – 2019) was born to Beryl and Jim Lewis on 1st January 1950. He had a younger sister, Annie. The family moved frequently with his father’s RAF postings, but often returned to his Grandparents’ farm in Kinsley, Yorkshire. Michael started boarding at Pocklington School in Yorkshire, aged 9. He got his first guitar aged 15 and had a life-long passion for music, playing in many bands. Michael passed his A-Levels and went on to study Natural Sciences at Christ’s College Cambridge. He stayed on in Cambridge after graduating, getting his first professional Job at the University Genetics Department. Michael married Caroline Bennett in 1978. Their children, Joe and Holly arrived in the mid-eighties. In 1982 he joined the Laboratory of Molecular Biology for the Medical Research Council where he worked for 32 years. During this time he made some very significant scientific discoveries and earned a PhD. Introduced to the sport by his daughter, he also had a committed career in the sport of fencing, both as participant and administrator. Michael was grandfather to Alfie and Ada. He died on 21st July 2019. 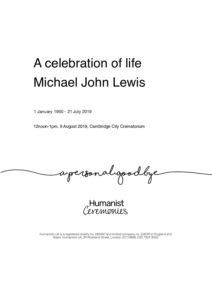 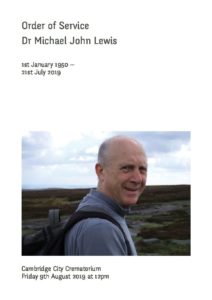