Simon John Hilditch (1957 – 2019) was born on 14th January 1957 in Oldham, Lancashire, to parents Eric and Trudi. The stand-out aspect of Simon’s personality was his quick wit and sense of humour. This was despite his diagnosis of Parkinson’s disease, which came only a year after he and his wife Maureen moved to their new home in Somerset in which they had envisaged an active and happy retirement together. Simon had previously enjoyed a career in the Merchant Navy. He loved the sea and he loved boats. Simon loved music, and jazz in particular, and he played the piano. He was a proud Lancastrian by birth. Simon died 18th August 2019. 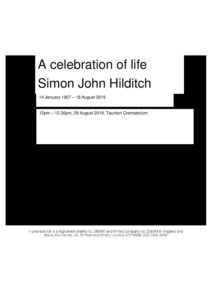