Sylvia Joy Myson, ‘Sylvie’ (1934 – 2019) was born in Cambridge on the 7th July 1934. She had three brothers, whom she looked after when their father died, when Sylvie was eleven. She left Coleridge School to work as a seamstress. Sylvie married Terry in 1956. They lived in Cambridge and had five children, Sandra, Andrew, Jenny, Kevin and Sarahjayne. Sylvie was a home-maker for her family but later returned to part-time work, including 18 years as a dinner lady, following her grandchildren to Priory Infants and Abbey Meadows where she became a ‘proxy granny’ to many. She was a devoted mother, grandmother and great grandmother. She looked after her grandson Carl from the age of 18 months. Sylvie survived kidney cancer in 2016 but later lost her voice due to Motor Neurone Disease. She was cared for by her family at home, where she died on 14th September 2019 . 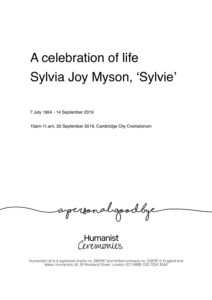 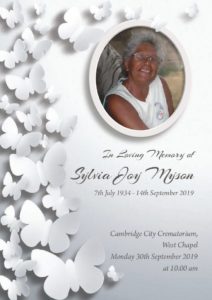