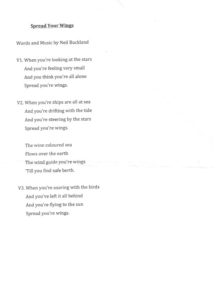 Sydney Buckland (1917 – 2016) was born on 31 December in Bermondsey, the only son among eight children. Before World War II, he worked as an engineer and then during the war he worked as a tank driver. Afterwards, Sydney made tools for the British Syphon company. He enjoyed playing the guitar, dancing, and travelling. He married wife Vera in 1947 and they had one son, Neil, and three grandchildren.