William John Davies (1935 – 2017) was born in Barry on the 7 April, the youngest of two children. He worked first as an apprentice carpenter and then joined the RAF before returning to carpentry once his service was over. Later on, he changed careers and became a Chartered Quantity Surveyor, calculating the materials that would be needed for the Millennium Stadium. William married his first wife Jean in 1956 and they had three children: Mike, Helen, and Julian. He later married Hazel and they had two children: Nicola and Kat. He had ten grandchildren. 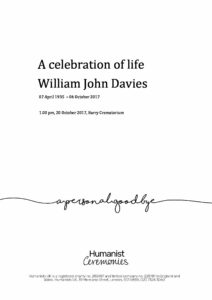