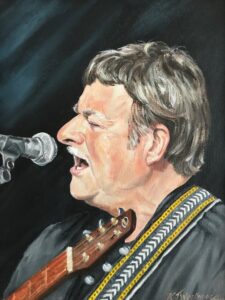 David Gumbrell (1944 – 2018) was born on 28 March in Weymouth. He worked as a stonemason and also played in a band called the Crescendoes which had a number one hit in Germany. David later worked at the Welsh Folk Museum and was part of a band called Mock Thee Knott. He was a passionate cricket fan and enjoyed cooking, fishing, and playing golf. David had son Simon with Gloria and later married Anne in 1989, becoming a stepfather to her three children. They stayed together until her death in 2002, after which he met partner Linda. 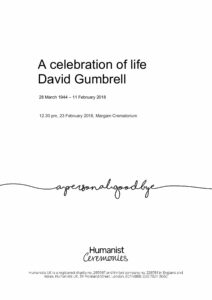 David Gumbrell Tribute Archive (pdf)
Celebrant and tribute contributor: Steve Parry.
Tribute to David Gumbrell delivered at a Humanist funeral arranged by their family. Includes a digital copy of a painting of David, (2018).