Paul Grunwell (1956 – 2018) was born on 28 November, one of two children. He studied at the Bolton Institute of Technology and then went on to work for ITV as a Development Engineer, specialising in HD technology. He later set up his own computer and networking company and then worked as an engineer at Gearhouse. Paul enjoyed cooking, woodworking, and other DIY projects. He married wife Pat in 1980 and they had two daughters, Jennifer and Heather, and two grandchildren. 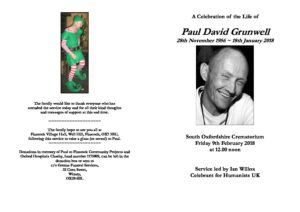