Glyn Davies (1921-2017) was born in Wales and spent much of his childhood in the workhouse, first in Griffithstown and then in Aberdare. At fifteen, Glyn was sent to Rossie House in Camberwell before the offer of an apprenticeship in nursery gardening allowed him to take lodgings in Streatham. His training was interrupted by the outbreak of the Second World War and conscription into the Navy. Returning home after four years service, Glyn worked on the railways before becoming a gardener in Dulwich Park, and later a gardener for Sydenham Girls’ School and caretaker at Kelvin Grove School. He traveled to many European destinations with his partner Derek, the pair enjoying an active social life in London. 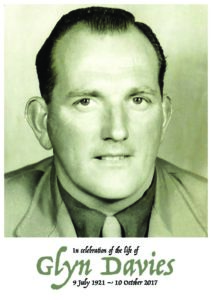 Glyn Davies Tribute (Word)
Celebrant: Trevor Moore
Tribute to Glyn Davies delivered at a Humanist funeral arranged by their family. Includes a digital copy of the order of service, (2017).