Donald Victor Goldsworthy (1928-2018) was born on 27th February 1928 in Leytonstone, the younger of two brothers. During the Second World War he lived with his grandparents in Colchester which led to him attending the prestigious Colchester Royal Grammar School. Donald Joined the Royal Air Force in 1945 and after being demobbed, he worked for United Rum Merchants in the City of London, eventually working his way up to chief accountant. Don met his wife Jean in a local Leytonstone youth club and they married in 1952. They had two children, Ian and Paula. Donald loved Tottenham Hotspur, DIY, and spending time with friends and family. He died on 10 May 2018, aged 90 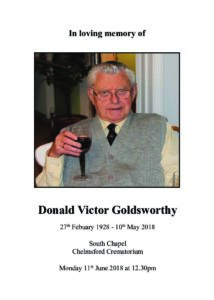 Donald Goldsworthy Archive Tribute (Word)
Celebrant and tribute contributor: Chris Holland
Tribute to Donald Goldsworthy delivered at a Humanist funeral arranged by their family. Includes a digital copy of the Order of Service(2018).