John Naylor (1932-2018) was born on the 12th of June in south-east London, the area he would remain for his whole life. He was one of two children. John attended Eltham College before becoming a state scholar at King’s College in 1950. It was at this time John met Elizabeth, his wife of 61 years whom he married in 1956. After a spell in the RAF for his national service, John became a teacher which led to him completing an MA. This in turn led to him embarking on a long, fruitful and hugely successful career as a publisher. John was known as a deeply cultured man and he was passionate about the arts, particularly books and classical music. He died in 2018 aged 86. 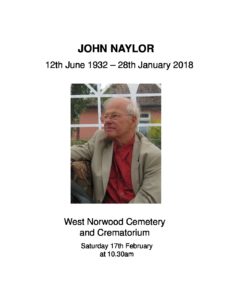 John Naylor Archive Tribute (Word)
Celebrant and tribute contributor: Trevor Moore
Tribute to John Naylor delivered at a Humanist funeral arranged by their family. Includes a digital copy of the Order of Service (2018).