Fay Lima (1934 – 2017) was born Fay Stokes in Barry on 15 February. She was the second of four children. She worked as an usher at the Theatre Royal and through this met her husband Gilbert. They had six children: Robert, Lena, Tony, Maxine, Margaret, and Nick. They later divorced and Fay married Graham. She enjoyed knitting and gardening and had various jobs throughout her life including as a barmaid, a stewardess, and a housekeeper. 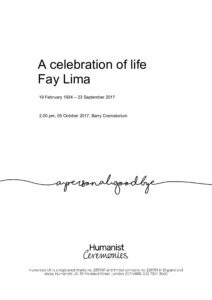