Olive Smith (1938-2017) was born and raised in Harrogate, the younger of two children. She met John, her first husband, when she was 20 and lived with him in Singapore whilst he served with the RAF. Upon returning from Asia, she and John lived at various air bases in and around Wiltshire. She and John later separated and she married Howard in 1973. They had two children, Simon and Gillian. Olive worked as a typist throughout her life, including for the Ministry of Defence and the Suffolk Constabulary. The family lived in Cameroon for two and a half years in the 1980s. Olive loved to visit Europe on her holidays – including in her later years whilst suffering health problems. Olive died on 19th January, aged 78. 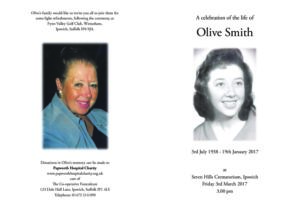 Olive Smith Archive Tribute (Word)
Celebrant and tribute contributor: Billa Eastoe
Tribute to Olive Smith delivered at a Humanist funeral arranged by their family. Includes a digital copy of the Order of Service (2017).