Otto Carballo (1945-2018) was born and raised in Trinidad, the youngest of six. He won a scholarship to a prestigious secondary school in Trinidad and Tobago, and then to the University of the West Indies. He later won a government scholarship to study architecture in England. When he was 23, he met and fell in love with Christine. They married and Otto became stepfather to her two children, Nicholas and Lalita. Otto worked as an architect and as immigration officer and later became an expert on forgeries. He was known for his intellectual brilliance and he was a member of Mensa. He died on 16 April, 2018, aged 72. 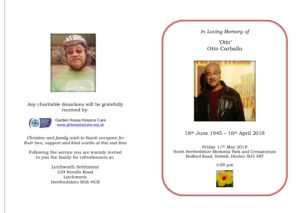