Harold Blackham (1903-2009) was a leading British humanist philosopher, writer and educationalist and is considered one of the pioneers of modern humanism. He was born in West Bromwich and following the end of World War I he attended Birmingham University. He played an important part in forming the British Humanist Association (now Humanists UK) and was a founding member of the International Ethical and Humanist Union (IHEU). He died in 2009 aged 105. 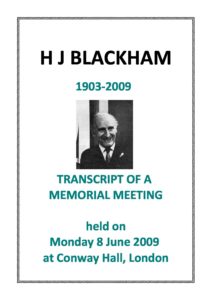