Allan Brent Ashworth (1955–2013) passed away at the age of 58, leaving behind his second wife, Karen, his five children, Sarah, Jenny, Kerry, Bekah and Jack, as well as three grandchildren, Isabel, Oliver and Samuel. Despite not enjoying school, Allan was a hard worker and talented cricketer. His diligence earned him a PhD from Nottingham which led to a career in the nuclear industry. Allan’s many interests included sport and music. He qualified as a cricket umpire and played the tuba with the Mid Sussex Brass Band, but perhaps his proudest achievement was to be appointed Radioactive Waste Advisor to the London Olympics! Allan was a devoted grandfather and a supportive father, always with a sense of humour and a desire to keep others safe and happy. 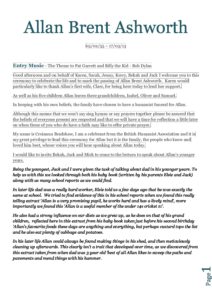