Ruth ‘Barbara’ Handley (1930-2018) Barbara, as she was always known, was born in Oadby, Leicestershire, on 19 March 1930 to Reginald and Edith Tunnicliffe. She had one brother Reg, who predeceased her. Educated at Blackpool Collegiate School for Girls, she entered Sheffield University to read French and English, and in 1949 met Graham. They married in 1951, and had three children Roland, Rosamund and Elaine. Rosamund died aged three in 1963. From 1959 to 1997 the family lived at an old farmhouse in Crews Hill, keeping dogs, cats, a donkey, goats and a pony during this period, and making wine, gardening, reading, and entertaining. Barbara swam for charity, was a keen vegetarian, made vast amounts of jam, and delighted in music and most forms of sport. When she and Graham moved to Cheshunt in 1997 the same rewarding and stimulating way of life continued for some years, cut short somewhat by her bravely cheerful fight against cancer. She was much loved for her kindness, humour, tolerance and natural sociability. 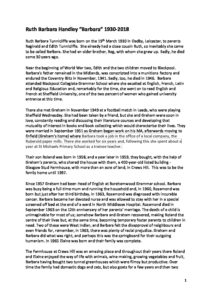 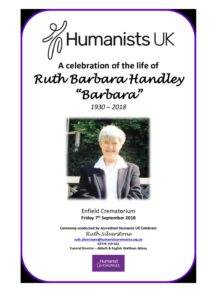