David Francis Kirkwood (1927-2018) was born in Perth, Scotland. He had two brothers, Jack and Neil. David attended many schools, but left aged 13 to go into private service, rising to footman at Alloa House. He did his National Service in 1946, training as a parachutist with a spell in post-war Palestine. David later returned to Alloa House where he was promoted to Butler. He loved dancing which is how he met his wife Tina with whom he had two daughters June and Shona. David’s last job was as a Commissionaire in Edinburgh, after which he and Tina retired back to Perth, where he passed away on 31st August 2018. David was a grandfather to Lee, Paul, Dale and Robin and great granddad to Sam, Jenna, Sean and Faith. 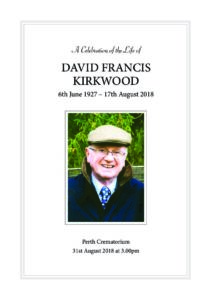 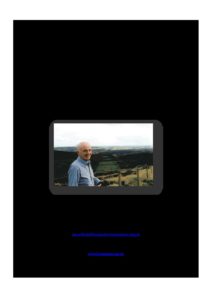 David Kirkwood Tribute (Word)
Celebrant and tribute contributor: Ian Willox
Tribute to David Kirkwood delivered at a Humanist funeral arranged by their family. Includes a digital copy of the Order of Service (2018).