Earle Derek Nash (1932-2018) was born in Bedworth, Coventry. He grew up in the family sweet shop which his mother ran. He attended King Edward VI Grammar School. He had a career with the East Midlands Electricity Board and also worked at Rootes and Armstrong Whitworth. Derek, as he became known, also served in the RAF for his national service, spending 18 months in Singapore. He married Jackie in the spring of 1959. They had two daughters, Jayne and Sally. Derek was a car and steam train enthusiast (including a high spot of driving the Flying Scotsman) and a keen photographer, making regular photo contributions to the Coventry Telegraph. In 1992 he became Grandad to Oliver. Early retirement at 62 enabled Derek and Jackie to rack up prodigious mileage walking in the British countryside. He played the piano, adored opera and loved his cricket. 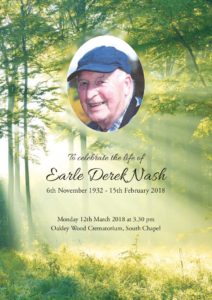 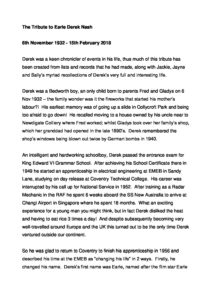 Earle Nash Tribute (Word)
Celebrant and tribute contributor: Moira Pendlebury
Tribute to Earle Derek Nash delivered at a Humanist funeral arranged by their family. Includes digital copy of the Order of Service from the funeral (2018).