Harold Leo Rhodes (1923-2010) was born in Newcastle to Charles and Mary Rhodes and had a younger sister, Maureen. They moved to London when Harold was 10, where he studied engineering. He became a Bevin Boy during the war, working in the Staffordshire coal mines. Harold was interested in politics and joined the Labour Party as a young man where he met his wife of 64 years, Ursula. They had a daughter, Judith. Harold worked for the National Coal Board rising to the role of Director of Overseas Mining. They retired to Harrogate in 1986. Harold was a quick-witted, humorous man and a keen walker. He was a crossword ace, setting crosswords for the Financial Times. 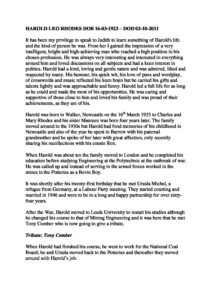