James Patrick Alington (1947-2018) was born in the Medway Towns, brother to Bill and Eve. After working for his father, Jim joined the RAF, becoming a pilot. He settled in Cornwall having been stationed there with the RAF. After leaving the RAF he worked for a building society and became a training officer for the Prudential. He also operated a mobile fish and chip van on the side! In his retirement Jim dealt in shares and investments over the internet. He also loved spending time boating and fishing. Jim loved animals, especially his cats. 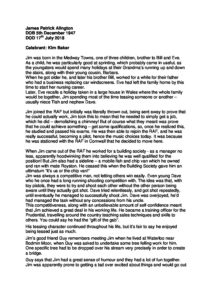