Frankie Karena Murison (1956 – 2017) was born in Kingsbury, London on 28 December, the eldest of her mother’s four children. She joined the police at 18 before undertaking several other jobs with her last a role as Staff Welfare Officer at Varndean College. Frankie enjoyed musical theatre, walking, and spending time with her family. She married Martin and had a daughter, Lucy, and one grandchild. Martin and Frankie separated in 2008 and she later met Phil who she remained with until her death. 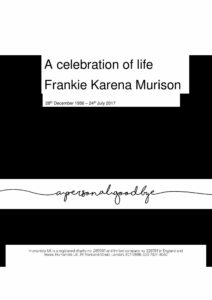