Neil Michael James Faraday (1968-2018) was born Neil Redhead in Cambridgeshire, to Margaret and John. He was the middle child of three, with brothers Martin and Andrew. He went to Dartford Road Infants and Westwood Primary School and then on to Hereward School for his secondary education. Neil’s first job was with the Department of Employment, leading to a move to Leicester. Later he worked at Viking where he became a team manager before a change of career to lorry driver. He later joined British Gas as a customer service advisor. At British Gas he became the LGBT workplace organiser for his GMB union and was a strong supporter of Stonewall and a member of the Labour Party. Neil met Mike in 1998. They entered into a Civil Partnership in 2006 and married in 2015. They developed a shared interest in motor cycling. Neil died peacefully after a 4 year battle with cancer. 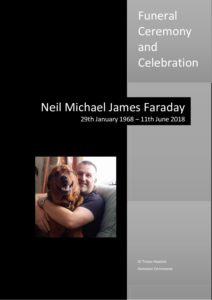 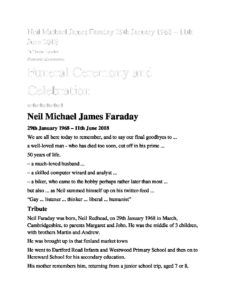 Neil Faraday Tribute (Word)
Celebrant and tribute contributor: Trevor Howlett
Tribute to Neil Faraday delivered at a Humanist funeral organised by their family. Includes a digital copy of the Order of Service from the funeral (2018).