Raymond Alexander Ward (1924-2018) Ray was born in Lewisham, the only son of George Sopp. He later changed his name to Ward. He got a scholarship to Beckenham Grammar but left school at 16 and became a clerk. During the war he was assigned to teaching radar. After a successful career he became a Reader in Operational Research and Statistics at Thames Polytechnic where he taught until he retired. Ray and Hazel had three children, Mary, Mike and Tom. In retirement Ray and Hazel carried on a business distributing software for crematoria. After Hazel’s death, he met Jean, who was his partner to the end, and with whom he published two books. He had a great sense of humour and was 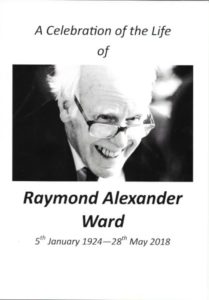 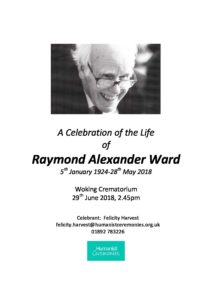 Ray Ward Archive Tribute (Word)
Celebrant and tribute contributor: Felicity Harvest
Tribute to Raymond Ward delivered at a Humanist funeral organised by their family. Includes digital copy of the Order of Service from the funeral (2018).