Robert John Soper (1956-2018) was the middle child of Joyce and John Soper. From the age of five there were signs of ill health. He was treated for for cerebral palsy at the age of eight and at the age of 20, Robert was diagnosed with Ataxia-telangiectasia. This would affect his movement, speech and swallowing. There was no effective treatment available. Despite this, he remained engaged with the world around him and never complained. As a teenager, Robert boarded at Thomas Delarue school in Tonbridge. He then moved back home but later lived in a flat with the help of carers. He enjoyed holidays abroad, bowling and sailing. As he became less mobile, Robert used his computer to access the wider world. When he died, aged 62, Robert was almost certainly the longest-lived person with the condition in the world. 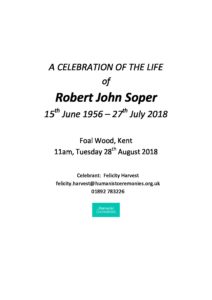