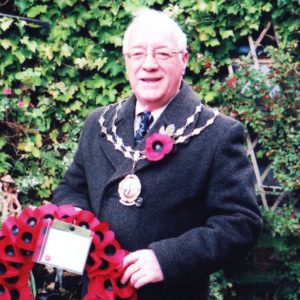 Dennis Taylor (1943 – 2019) was born on the 18th of October in 1943 in Belfast, the fourth of five boys born to David and Jane Taylor. On leaving school, he started working in a greengrocer’s shop. He was lead vocalist and guitarist in a band called the “Blue Orchids”. Dennis left Belfast and found work as a hospital porter in Birmingham. In 1968 he married Pammi in London, where he subsequently moved, working at hospitals in Whitechapel and Acton. Later, he changed careers and worked for the United Friendly Insurance Company. Dennis and Pammi had two children, Geeta and Neil. The family relocated to Cheshire, where Dennis joined the Civil Service, where he would stay for the next twenty years. They settled in Frodsham. Dennis enjoyed gardening, snooker and music. Dennis became a member of Frodsham Town Council, serving twice as Mayor. He suffered a stroke in 2016 and in May 2019, Dennis was diagnosed with bladder cancer. He died at home on 26th October. Dennis had two grandchildren, Christopher and Alex. 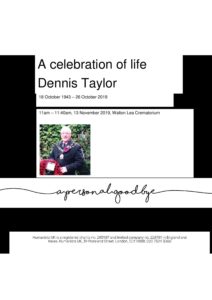