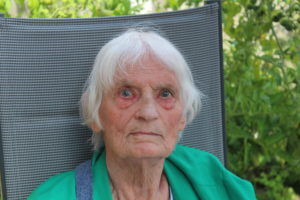 Hazel Birkby Pennington (1928 – 2019) was born on the 9th of June 1928 in Richmond, Surrey, to Isabelle and Reginald. She had two brothers and three sisters. She went to Trafalgar Junior School in Twickenham and Nella Secondary School. She left school at fifteen and trained as a tracer of technical drawings. She taught herself to play the piano by ear and she had a beautiful singing voice. Hazel joined the WAAF at age 19, where she met Alec Pennington. They were married in 1949. Their first child died whilst still a baby, which affected Hazel deeply. Their daughter, Hazel Ann, was born in 1951. The family was posted to Germany until 1957, when they returned to live in Wiltshire. Hazel again worked locally as a tracer. In 1968 the family moved to London, where Hazel took on the lease of a tobacconists/sweet shop. The life did not suit Hazel and she had a nervous breakdown, aged 45, and could no longer run the shop. With Hazel Ann now married, Alec and Hazel moved to the Northumberland Moors. Alec and Hazel divorced in 1977, so she moved to Newcastle Upon Tyne near where her daughter and husband lived. After a severe asthma attack in 1989, Hazel moved nearer to Chester, where her daughter now lived. Hazel had two grandchildren and six great-grandchildren. After some health issues, Hazel moved to a flat at The Windings in Helsby where she spent her final years. She died on the 2nd November 2019. 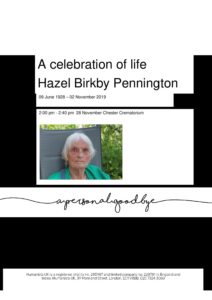 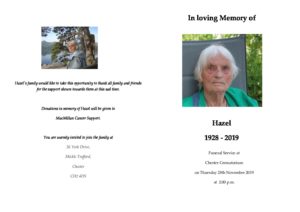 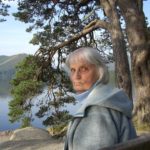