Margaret Saunders (1924 – 2019) was born on 25th November 1924 in Croydon, to Sidney and Ellen Uphill. She had an older older sister, Hilda. During the Second World War, she was evacuated to Norfolk. After the war, Margaret returned to London and married Albert Saunders. They had three children, Janet, Donald, and Ann. Margaret looked after the children and the home. They bought a smallholding in Norfolk which Margaret ran whilst Albert continued to work as an engineer. Margaret became very involved with her local community, and was a keen member of the Women’s Institute, representing them at the National Conference in London. After moving to a smaller home, Margaret worked at the local school as dinner lady and caretaker. Margaret and Albert were instrumental in establishing the Millennium Green in Carbrooke in 2000. Cycling was a large part of family life and Margaret and Albert became involved in the organising side of the sport. They were committee members of the Road Time Trials Council for the Eastern District. Following Albert’s death in 2008, Margaret continued to live in their cottage, with support from her family until she needed constant care, and moved to Dorrington House for the last five years of her life. Margaret died peacefully in her sleep on 10th November 2019. 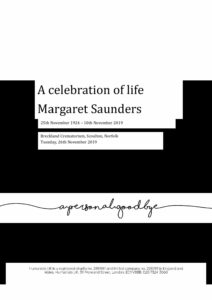 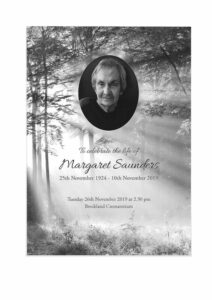