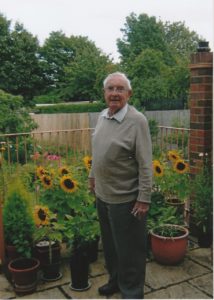 Noel Gibbard (1922 – 2018) was born on 12th December 1922 in Hornsey, London, to May Mallard and William Gibbard. He had an older brother and sister, Roger and Rosalie. His childhood home was in Folkestone but he was evacuated during the war. Noel trained at the officer cadet training unit and Kings College, as a Royal Engineer. He was posted all over the UK and Europe, rising to the rank of Lieutenant. Noel married Elizabeth, with whom he had three children, Anne, Sheila and David. He continued his engineering degree at Cambridge University and eventually set up home in Slough. Noel’s career took him to Haden’s in London, as a heating and ventilation engineer. He rose to a managerial position but turned down a directorship to remain on the floor as a manager. He soon became an expert in his field. His academic papers on heating and ventilation engineering were well regarded by the Royal Institute, who on one occasion, awarded a medal to Noel for his outstanding research. Noel and Betty became grandparents to Joanna, Jen, Philippa, Duncan, Nicola and Andrew. In 1982 he retired but took an active roll with the Chiltern Humanists, where he became their Chairman. He wrote political articles for the Times under the pseudonym of Ian Woods and volunteered for the Maidenhead Voluntary Bureau. He bounced back after the death of his wife and his son David. Noel was diagnosed with lymphatic leukaemia and eventually died on 7th December 2018.