Patricia Legge (1940 – 2019) was born Patricia Ivall on 13 March 1940 in Alverstoke, Hampshire. The family moved to Duxford, where Pat grew up with her sister Fay and her brother Jim. Whilst working at Babraham Research Institute in Cambridge, she met Anthony Legge, whom she married in December 1961. They had two children, Karen and Alex. Pat and Tony moved to Great Shelford. Pat then decided to pursue a career in education. She trained at Homerton College. She loved teaching and taught at primary schools in Stapleford, Grantchester and Coton where she became Deputy Head. Her final teaching years were spent as Headteacher at Harston and Newton Primary School. Pat took her MA at Madingley Hall Institute of Education. Pat eventually retired and ran a B&B from her home in Great Shelford. She enjoyed amateur dramatics, both acting and writing. Pat was a grandmother to Lucy, Tom, Joe and Wyn and also to Alex’s stepchildren Perys, Owain and Dylan. Pat did not want extensive treatment for her oesophageal cancer, preferring quality of life over a difficult extension of it. She died on 7th November 2019. 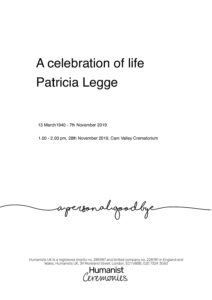 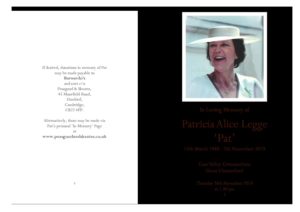