Raymond John Lyon (1933 – 2019) was born on 19th July 1933, to Vera and John. His early years were spent growing up in Croydon, with his younger sister Yvonne. He was evacuated to Brighton and then to Wales during the war. He was required to work hard on a farm, and his education was disrupted. His first “proper” job was working on a building site. He also did factory work at Payne’s Chocolate Factory and Thornton’s in Croydon. He spent time working as a security guard at a shopping centre in Croydon, but his main role, where he seemed to find his niche, was working for twenty one years as a porter at the Queen Mary’s Hospital for Children. Ray had three marriages and six children, Simon, Anthony, Teresa, Nick, Kerry, and Richard. He also fostered children. Ray and Jennifer left Croydon to spend their retirement in Lyng, Norfolk. It wasn’t retirement in the strict sense of the word because Richard was still only eight years old and Ray was still very much a parent. Ray continued to keep busy by doing gardening jobs for neighbours and tending his own garden. Ray’s health declined in later years and so he lived with Richard for the last eighteen months of his life. He died peacefully at the Norfolk & Norwich Hospital on 5th November 2019, leaving behind his children, grandchildren, and a great grandchild. 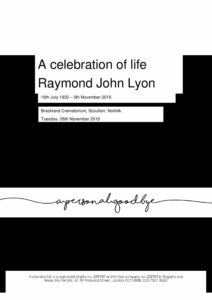