Elaine Ann Kimber (1950 – 2019) was born Elaine Ashby, in Leicester on 14th March 1950. She had an older sister, Gillian, and younger brother, David. Her father died when she was nine. At school she excelled in all subjects and developed an aptitude for art and crafts. She was also a talented hurdler and discus thrower. She represented Leicester Schools in national events. Elaine became a PE teacher and moved to Bedford, teaching at Long Stratton High School for 39 years. During that time her role developed into classroom teaching and pastoral roles. She became a mentor and supporter of junior staff, and also took on the role of Acting Assistant Head at various times. Her first marriage, to Glenn Rooke, gave her two sons, Ben and Tom, born in 1977 and 1980 respectively. In 2000, Elaine rekindled an old friendship with Nigel Kimber, an old teaching colleague. They lived together in Norwich and married in 2009. She played hockey for Harleston Magpies, and also helped run Bunwell Hockey Club. She was Ladies Captain of her golf club in 2006 and 2018. Elaine had three grandchildren, Charlotte, Freyja and Joseph. For the last eighteen months, following her diagnosis, she was frequently in the Norfolk and Norwich Hospital, where she died on 12th December 2019. 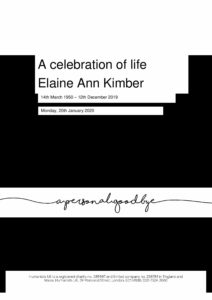