Florence Vera Pearce was born on 1st October 1916 in Brixton, London. She married her first husband, Fred, in 1937 and they had three daughters – two of whom died. They adopted a son and, after the war, had twin girls. During the war the family were evacuated to Somerset, a time of happy memories for Florence and her family. Vera and Fred divorced and Vera later married Horace.
Vera was always game for a laugh and liked to dress up for Halloween. It was Vera’s ambition to reach her 103rd birthday and she lived to celebrate it. Despite being blind for the last ten years of her life, Vera lived independently at home with support. She was a great walker and in her ‘90s walked all the way around the lake at Stourhead. Vera attributed her longevity to drinking milk, eating scampi and having the occasional glass of Baileys. 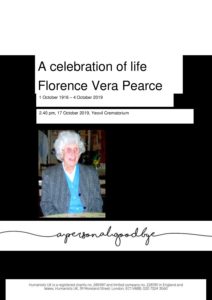