Howard Grimmett (1944 – 2019) was born on the 17th April 1944 in Ilford, Essex. He had a twin sister, Lesley and a brother, Noel. He left school in 1959 and spent a short time farming. He then joined Dunn & Co, the clothing retailers, followed by Harrison Gibsons, the furniture store. Howard then moved to Caleys in Windsor, and later onto Waring and Gillow in Oxford Street. He finally settled at House of Fraser in Bromley. Encouraged by his wife, Catherine, Howard then set up his own furnishing business. His wealthy clients provided Howard with many anecdotes with which to amuse people. He loved his pet pug dogs. Sadly the last 10 years of Howard’s life were marked by a number of medical conditions. He died on 9th November 2019 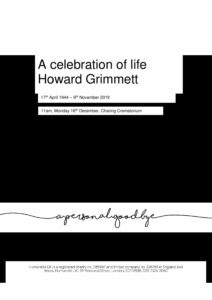 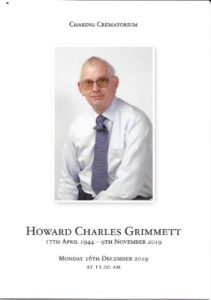