Joan Kucmyda (1941 – 2019) was born on 8th September 1941 to John and Vera McManus. She grew up in Halifax and Elland. She went to Clare Hall School. Joan married Tom and moved to Shepley. They had three sons, Brian, Steven and Christopher. After they separated, she moved to Crossland Moor. She worked at GSM Electrical in Huddersfield and did evening work to support herself. Joan achieved her Queen’s Guide Award and became an Akela for the Cub Scouts. She was a fabulous ballroom dancer, and met her second husband, Michael, at the Dyers and Finishers dance. They married in 1986 and Joan became step-mum to Lisa. Joan worked for the local council after GSM closed in 1995, until her retirement. The couple travelled extensively, sometimes in their motorhome. Latterly, they spent the winters in Spain, where they bought a house. Joan was diagnosed with cancer in 2016 and died on 21st November 2019, in Huddersfield. She was a grandma to John, Sam, Carl, Luke, Lauren and Joe, as well as a great-grandma, to Harvey, Theo and Isla. 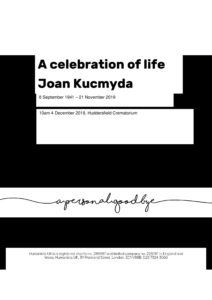