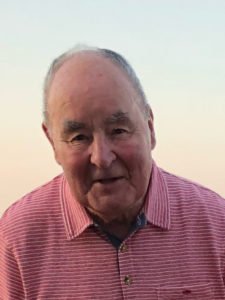 John Grenville Williams (1936 – 2020) was born to Sam and Dorothy in Bedwas, Caerphilly, on the 30th of October 1936. He had a sister, Audrey and a brother, David. Aged 11, he went to a Technical Grammar school and then to New Tredegar Technical College. He represented both at rugby. John left school at 15 and began an apprenticeship as a mechanical engineer for B.O.A.C. He did National Service in the RAF, afterwards returning to B.O.A.C., where he worked for the next forty years. In 1967 John married Marilyn. They settled in Bedwas, where John played rugby for the local side. They bought a house which John improved and extended over the next 50 years. They had two children, Huw and Suzie. John retired in 1993. He took up painting and drawing and continued to travel widely. In 1996 Suzie suffered a serious medical setback that impacted the family. John had been suffering the slow onset of Alzheimer’s for some time and more recently had suffered from heart problems, but his sudden death on 7th January 2020 was unexpected. 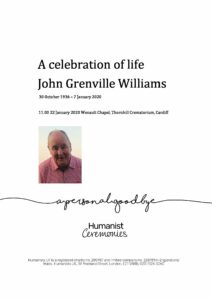