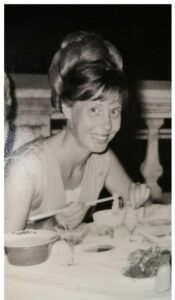 Joyce Pemberton (1929 – 2019) was born in Derby, on the 14th November, 1929 to Joseph and Hannah Brayshaw. They moved to Blackpool when Joyce was around three. She had an older sister, Joan. Joyce went to Revo junior school in Blackpool and then to Tyldesley Secondary School until she was 14. Her first job was at a local library, where she later met Frank, whom she married when she was 22. They had a daughter, Sue. Frank was in the army, which meant much of their life was spent living overseas. Joyce loved ballroom dancing and was an accomplished piano player and musician. In the mid 80s, Frank and Joyce retired to Heysham. After Frank died, Joyce remained in their home for 17 years. She took on the upkeep of their house and garden. As Joyce’s memory started to fail she moved in with Sue for four years until she needed more care. Her last years were spent at Highclere Nursing Home, where she died on 28th November 2019, after a chest infection. Joyce was grandmother to James, Andrea, Matt and Paul, and great-grandmother to Erin, Libby-Rose, Isaac and Evie-Lou. 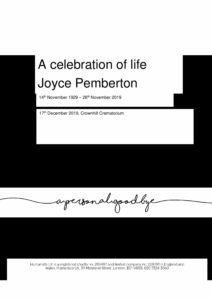 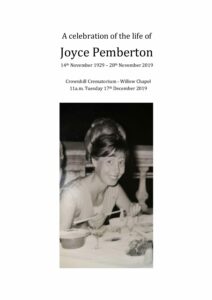