Martin Thomas Gilbert (1921 – 2019) was born in Folkestone on 8th February 1921, to Charles and Dorothy. He had a younger brother. Martin won a scholarship to The Harvey Grammar School. In 1937, he started an electrical engineering apprenticeship in London with Marryat & Place and gained a Higher National Certificate in Electrical Engineering. In 1940 his parents moved to Sunderland, where Martin joined them after his London accomodation was bombed. He worked in a shipyard until 1943, when he joined the Navy as a Volunteer Reserve. This turned into a 25 year commission in the Royal Navy. After the war, Martin met Jean, whom he married in 1950, after a three year posting in the Mediterranean. In 1961, the couple settled in Totnes with their three children, Anthony, Ruth and Sarah. Martin retired from the Navy in 1971, having attained the rank of Commander. After the Navy he joined Gilflex, a company his father had started, making plastic electrical conduit. This led to a career in international trading standards. Martin became a keen sailor in the 70s and 80s. Martin and Jean were active members of the Totnes community and Martin was a key member of a group that supported Tanzanian farmers. Jean died in 1991. Martin married Anita in 1993. Anita died in 2012, and Martin‘s health began to deteriorate. He died in Torbay hospital on 17th November 2019. 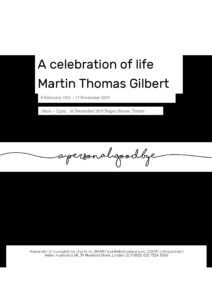