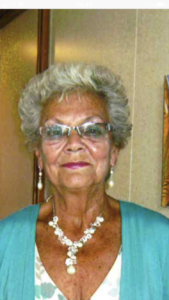 Patricia Pinch (1929 – 2019) was born in Barry on the 16th May 1929 to George and Iris Follett. She had an older brother, Eric, and younger sister, Jean. Pat left Holton Road school aged fifteen and trained as a hairdresser at Raymond’s in Cardiff. Once qualified, she became a mobile hairdresser. Pat married Brian in 1950 and their first home was a top floor flat. Mike was born in 1951. The family moved to Hatch Cottage, where Vicky was born in 1959. Pat started working part-time in shops, locally and in Cardiff. They built a new bungalow in the grounds of Hatch Cottage. Pat spent a lot of time with her grandchildren; Carl, Neil, Jennie, Tom and Emily. She was also a great-grandmother to Joseph, Olivia, Jacob, Evan, Nia, Ella, Evie and Charlie. Pat never got over Brian’s death in 2006. She died on 31st December 2019. 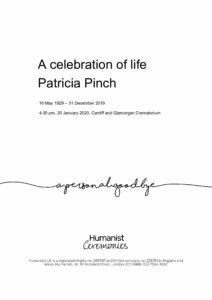