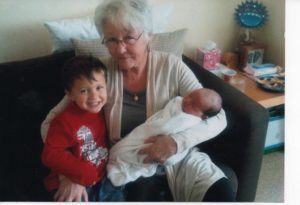 Pauline Evelyn Williams (1941 – 2019) was born on the 28th April 1941 in Cardiff to Charles and Mary Taylor. She had a brother, Robert. She married Ron O’Dare in 1962. The first ten years of married life were spent at her parents’ house and then in caravans. It was during this time that their three boys, Mark, Craig and Shaun, were born. In 1972, the family moved into a house, with a large garden, in St Athan. Pauline had a gregarious personality and was an active member of the local community, including the Young Wives Club and boys’ clubs. She organised the street party for the Queen’s Silver Jubilee in 1976. She also worked several jobs to help provide for the family and was an excellent cook and baker. In 1989, Pauline married Ray Williams and moved to Llanedeyrn, where she worked as a caterer. She was grandmother to Charlotte, Ashleigh and Ryan. Pauline died on 15th June 2019. 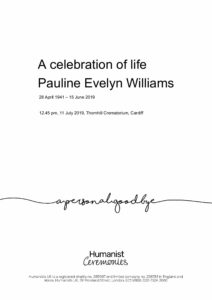