Reg Lawson (1936 – 2019) was born on 17th August 1936, to Jenny and Arthur. He had two older sisters, Barbara and Dorothy. Arthur died when Reg was only a few years old, and Jenny brought the children up on her own for a number of years. At school, Reg was a keen rugby player, playing for the school team and also Headingley Juniors. He never lost his passion for the sport, and followed Leeds Rhinos all his life. When he was 18, Reg joined the army and served three years in the Royal Engineers, spending much of his time in Germany. Reg married his childhood sweetheart, June, in 1959. They had five children together, Garry, Diane, Graham, Kevin and Sandra. Reg was a sheet metal worker, spending twenty years at Oliver Douglas. He was not a big traveller, preferring to play darts and dominoes at his local pub. The exception was his annual trip to London for the Rugby Challenge Cup Final at Wembley. Reg was a grandad to Martin, Kelly, Katie, Matt, Nicola, Linzie, Sam, Charlotte, Rebecca and Sarah, as well as having 19 great-grandchildren. He died on 20th December 2019. 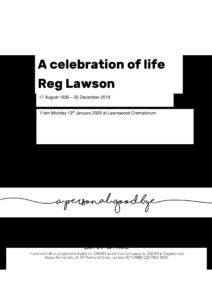