Rodney John Birks (1944 – 2019) was born on 14th March 1944 at Stratford Hospital, London, to Elsie and Alf. He had an older brother, Geoff. He grew up in Leytonstone. After school and technical college, he got a four year apprenticeship with Ford and qualified as an engineer. He had many roles within the firm including union representative. As a young man he enjoyed rally driving with his brother Geoff. His passion for cars, scooters and motorbikes remained throughout his life. Rod had three children with his first wife, whom he divorced in the mid 80s. He met Judy, whom he married in 1990 and moved to Westcliff. They bought a second home on the Norfolk Broads, where he developed an interest in boats. Rod joined the committee of The River Thurn Tenants Association. In 1995 he had a heart valve operation and subsequently a stroke. He became an active member of The Stroke Association, supporting other sufferers. He was also active in a number of other associations including the Labour Party, Ramblers Association, Jaguar and Harley Davidson Owners clubs, and local poetry and film clubs. He was also a fan of rugby and jazz. Rod had a grandson, Ryan. He died on 4th November 2019. 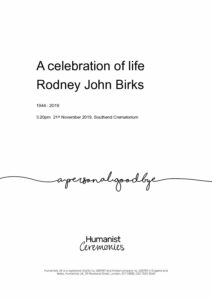