Stephen Hazell (1942 – 2019) was born on 22nd January 1942 in Paignton. He had three older siblings, Maurice, Julian and Judith. When he was still a baby his father was killed in the war and so Stephen was raised by his grandparents. He went to King Edward VI Grammar School in Totnes, where he became head boy. He then went to Merton College, Oxford, to read English. Stephen was awarded a Fulbright Travel Scholarship to do postgraduate research for a year at Rice University in Houston. He returned to London, and met Lynda while he was a supply teacher at Paddington School. They married in June 1966. Later that year, he became Head of English at Hendon College. Stephen and Lynda had two daughters, Kate and Libby. Stephen did his doctorate at UCL. In 1985 he moved to the Central School of Speech and Drama for five years, as deputy director. It was during this time that he and Lynda separated. Stephen met his partner, Usha, and Alya was born in 1989. In 1993, Stephen became Head of Visual and Performing Arts at the National Institute of Education in Singapore. Rohan was born in 1995. In 2007, the family returned to the UK. Stephen became an external examiner in Drama and Communication at the London College of Music, and a governor at Courtyard Theatre Training Company, Shoreditch. Stephen’s health deteriorated in his last six months. He died at home on 10th October 2019. 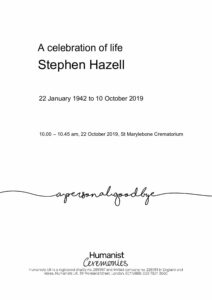 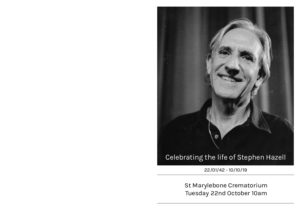